"Toot toot! Chug chug, chug chug" says the Duplo train set. What is it about toddler and trains? The first storybook my little toddler would sit through was a train story: The Little Engine that Could.

Maybe that’s why their Duplo train set is the one and only battery-operated toy I’ve ever bought my toddlers. In general, toddlers do best with non-automatic toys that operate only by toddler power. There are no leapfrog tablets, baby computers, or sing-and-speak baby iphones in my house.  Toddlers need the opportunity to learn by discovery, not by listening to robotic voices or watching, entranced, as a machine entertains them.

But a train set is somehow special. And if your buy your toddler the kind of hands-on, tear-apart and put-together train set that encourages exploration and creative thinking, it certainly doesn’t involve any passive entertainment. There’s just too much to do, too much to try out, too much to explore.

What Not to Buy Your Toddler

So don’t buy one of those delicate electric trainsets that, paired with some cute miniatures, are meant to be put up carefully on the table around Christmastime, turned on to add to the holiday feel, and watched by excited toddlers who are warned not to jiggle the table or touch one piece.  There’s no fun in that, unless you’re an all-adult house. If your home is a toddler-home, go instead with something meant for toddler hands. And if you’re looking at toddler-friendly trainset, there’s nothing higher quality or better engineered than a Duplo set, made by the Lego people.

Duplo train set has large, bulky pieces that are very hard to break, and that a three year old will have no trouble fitting together. The train itself is sturdy enough to take being dropped to the floor many, many times; and all electric parts are so well tucked away that trains, tracks and all other pieces are perfectly safe, even for unsupervised play.  The battery compartment is secured with several screws, so unless junior is very good at handling his daddy’s screwdriver, there’s no danger there.

Duplo train sets are just the right size for toddler hands; big enough to be graspable, manageable, and at the same time not too big.  Everything, even the engine, can be taken apart—and then put together in a way that makes it seem it was built in one piece.

And Duplo trainsets are fun. They make fun motor noises, signal at intervals, and make glug glug noises when your toddler refills the gas tank—but none of those noises are loud enough to be annoying to an adult in the room. They have enough power to pull at least two wagons, loaded with whatever your toddler loads such things with; or to push a car ahead of them—something that really tickles my toddler’s fancy. You can even build a Duplo tower on top of the engine and send it on its rounds that way, watching the tower swaying at every turn.

You have two choices for a toddler train set; which you decide on will probably depend on your toddler’s age, your budget, and perhaps your sense of aesthetics. 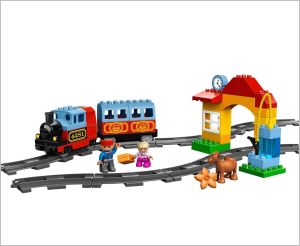 My First Train Set offers a very cute steam engine with a passenger car, two children figures and a goat, blocks to build a station with and enough track to make a round.  The only downside to this track is set is that a circle might get boring if your child is more than two—but you can always remedy that with an extension pack and make your layouts more exciting. 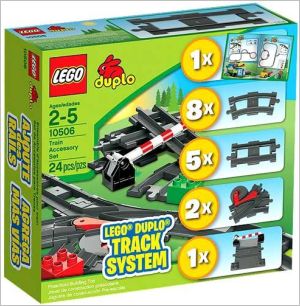 Or you can just buy the Deluxe Train set. It’s not as cute, maybe; the train is a modern cargo train versus that passenger steam train But there’s a lot happening in this set. Cargo can be loaded and unloaded with a crane, and the track can be put together as a figure eight with a little railway bridge. This train is also compatible with all other Duplo trainsets, including the track extension pack. On the downside, it is twice the price of the simple train set.

Whichever set you choose, your toddler will have lots of fun with his Duplo train.