Should your toddler be playing online toddler games, or not? It’s a controversial question.  In general, giving toddlers a lot of computer or screen time is not good for their development. The advertising on these games make it look like we’d be doing our toddler’s brain a favor to give him unlimited access to them, but these advertisements are slightly misleading. Even educational online games for toddlers only work one very tiny area of your toddler’s brain at a time, while the rest of his brain and body are vegetating.

Before you introduce your child to online games it’s important that you do your research and establish a set of family ground rules. Internet can be a wonderful thing, but it can also be incredibly destructive if it is a misused. Your toddler isn’t capable of making intelligent decisions for himself right now, so you need to make them for him.

Here are some rules you should consider establishing at the same time that you introduce your child to his first onlin games.

• The computer/ipad/tablet is only for use with permission: make sure your toddler knows he should not start playing alone.

• Only have your toddler play online games when you are in the room; preferably, right next to him. 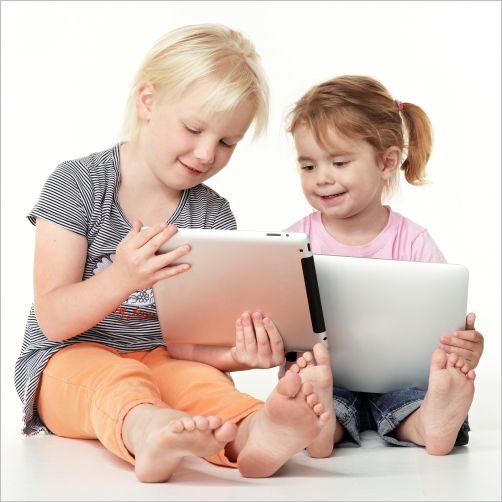 How long is it okay to let your toddler play games online? Not long, to be honest.  A child under two shouldn’t really be playing games online at all—their brains are going full power in discovery mode as they find out everything about the groundwork of our world, and you shouldn’t arrest that development by chaining your child to a computer screen. In fact, the American Academy of Pediatrics recommends no screen time at all for under-twos: that means no TV, computer games, or playing with mom’s phone or iPad.  Electronic media tends to have a negative effect on a growing toddler’s health, attention span, language development and imaginative abilities.

What about after two? I’m not a pediatrician, but Toddler-are-fun’s recommendation is that you have your two year old play no more than five to eight minutes at a time, no more than twice a day. A three year may be allowed to play toddler games for two ten minute sessions, with plenty of run-around time in between. By four, your child can be doing two fifteen minute sessions or one that’s twenty minutes long. More than that is just not good for little people.

Children pick up on computers ridiculously fast, so don’t worry that by curtailing your child’s computer use now you’re endangering his potential computer science career. A ten year old child can learn all the basic ins and outs of a computer fluently within just one day, and children who have had computer experience as toddlers do not have any edge on those who learn later.