What is normal toddler behavior? My child suddenly turned spoiled—what’s wrong? Why is my cherubic little one changing into a stubborn imp? These are questions that many parents of toddlers ask, as they move for the first time from the relative peace of babyhood to the more tumultuous waters of the toddler years.

First—don’t be overly concerned; a ‘difficult phase’ is perfectly normal for new toddlers. That’s why our mothers used to talk about the ‘terrible twos’.  Here we’ll look some of the aspects of normal behavior of a toddler. On another page we’ll discuss toddler discipline and how you can help your child by setting boundaries.

Toddlers thrive on routine, and if your daily schedule is all over the place, your child might be fighting just to keep his head above the water. It’s hard for some children to adjust to an ever-changing world, but you can help immensely if you create a schedule and routine for your toddler and stick to it. Bedtime and mealtimes are two things that really need to be set in stone if you want good behavior.

Toddlerhood is when your child finally has capabilities wider than his permissions. He went through babyhood being able to do anything he wanted; anything he could do, he was allowed to do. Now he is suddenly capable of much, much more—and he finds, for the first time, that ability is not his only boundary.

Any new idea needs testing by experimentation, so it’s only normal your child will experiment on his limits by breaking as many rules as he can—if only to see the consequences. Be firm, be consistent, but stay gentle., and eventually the toddler's behavior will improve

One day your toddler is like a happy sunbeam. The next day, there’s nothing you can do without getting an emphatic NO! and the beginning of a temper tantrum.  It’s like teenage hormones, only your child is barely out of diapers.

Your child is doing a lot of growing, and it’s not all physical growing. That mind of his is growing, too, by leaps and bounds, and a little imbalance is nothing to be surprised at. Keep cool, gentle, and consistent, and pretty soon the bad days will be fewer than the good ones. 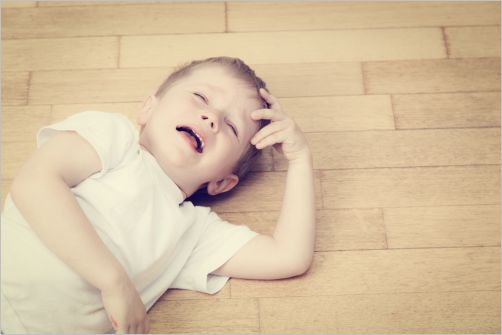 This may be one of the hardest parts of handling your toddler's behavior. The first time you hear that—or the still worse I HATE YOU! – it might feel  as if your heart will break. You carried that little one for nine months inside you, and then for upwards of a year he was the sweetest little thing, with his adoring smiles just for you and his close, happy cuddles. You’d got to thinking that this was how it was, and that your relationship with your child was something unlike anything that has ever been; that you two were meant for each other, and he would always look at you with love light in his eyes.

Don’t overact, though—your child still loves you as much as ever. He’s just experimenting with ways to influence his world, and trying to get a reaction.  Tell him mildly that that’s not the way to talk in your house, and leave it there. If it becomes a habit, you may want to give undesirable consequences for saying that—time out, for instance.

Realize that toddler behavior comes with the territory, and it will all be outgrown. Don’t get bent out of shape out it!